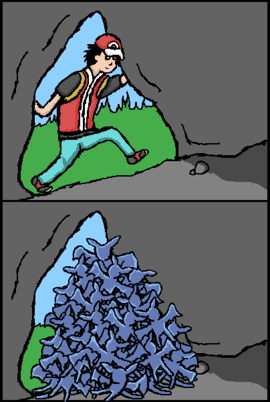 We can't stop here.
This is Zubat country.
"Every first-person game seems to have these tiny little enemies that hop at your face, are hard to hit and, worst of all, are unsatisfying to kill."
— Cracked, "The 7 Commandments All Video Games Should Obey"

Weak enemies that exist primarily to annoy the player character. They probably aren't gonna kill you, but they're certainly going to harass you and slow you down, making it easier for something else to kill you.

Almost every video game has them. These are the enemies that are just a speed bump, even if they are not outright dangerous. They're not difficult to defeat, but because of the frequency with which they appear, they can become a significant hindrance to the player, and they usually don't give you enough of a reward to make fighting them truly worth it, either. Even the explosion made by killing them is paltry compared to other enemies.

They're the goddamn bats, man.

A key trait is that they generally don't pose too large of a threat on their own; they're more annoying than deadly. When an enemy starts posing an actual threat, then it's a case of Demonic Spiders and, in extreme cases, the Boss in Mook Clothing.

Note that this designation applies to any type of non-threatening enemy whose purpose is to stall and harass the player. Goddamned Bats are common in Platformers, where they enjoy disturbing precision jumping.

They don't have to be bats. The best definition of the Goddamned Bats trope is that they are not only common enemies that will swarm you, and they are not only pathetically easy to kill on their own, but they take no skill to defeat, in RPGs they don't provide much (if any) experience or gold when beaten, and are sometimes flat-out annoying. A famous example of this is Zubat in the Pokemon series which were found in nearly every cave in the first 4 generations and liked to inflict various Standard Status Effects on the player before going down.

Other following factors can contribute to making an enemy a Goddamned Bat:

Occasionally, Goddamned Bats can be a result of the setting; for example, a water level can inadvertently graft Goddamned Bats characteristics onto any enemy if the game has poor movement controls.

The Trope Namer is, well, actual video game bats. Bats in video games tend to have many the aforementioned traits; very common in caves and other dark areas yet are individually easy to defeat, their small size and fast movement makes them difficult to hit in real-time games (and turn-based games reflect this by giving them high evade rates), and since they fly the player is usually unable to hit them with melee attacks.

See Goddamned Boss for bosses with these characteristics. Compare The Swarm. For literal bats that God has damned, see Bat Out of Hell.