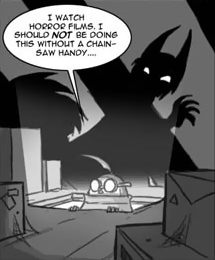 Relax, it's just a squirrel.
Angela Moore: This doesn't make any sense.
Shawn Hunter: It does if you've seen as many horror movies as I have. This is classic. The locked door, the scary janitor, the bloody warning and… our soon-to-be first victim.
[everyone looks at Kenny]
Kenny: Me? Why me?
Cory Matthews: Well Kenny, it's certainly not going to be any of us!
— Boy Meets World
Advertisement:

A Genre Savvy character doesn't necessarily know they're in a story, but they do know of stories like their own and what worked in them and what didn't. They may attempt to apply the lessons they've learned from movies, books, or other fiction to their own situation, or they may restrict themselves to snarky asides and observations. The exact opposite of Genre Blindness.

Not to Be Confused with a character who has observed what works and what doesn't in their own world, which is Taught by Experience.

For specific tips on surviving the world of fiction, see The Universal Genre Savvy Guide.

Example of:
Silly Reason for War