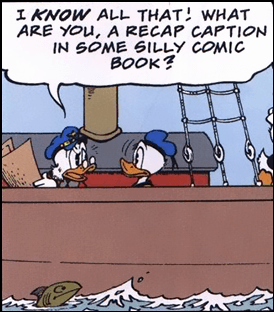 Dagobert Leaning on the Fourth Wall
Richard: No, you know how today we're heading into the land of the Giants to offer them the Jewel of Valencia in exchange for joining our quest to save Princess Isabella?
Galavant: Yes, we discussed it last night in great detail. There's no need for your clunky exposition.
— Galavant
Advertisement: