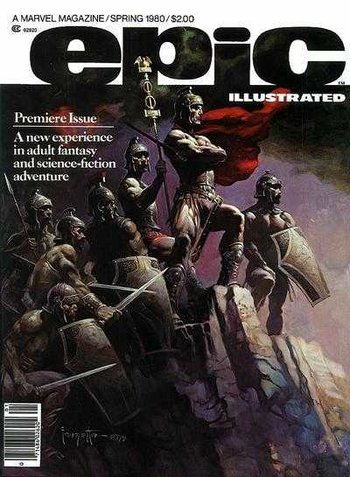 Epic was a Marvel Comics magazine which featured groundbreaking artwork and stories that focused on a market for more mature readers, similar to Heavy Metal. This magazine ran for 34 issues between 1980 and 1986 with contributors such as: Rick Veitch, Terry Austin(Inker), Jim Starlin, Stan Lee (1st issue), and Wendy Pini (1st issue).
Advertisement:

According to the Marvel Bullpen Bulletins from October 1979, the Epic name was originally "Odyssey", but was renamed after Marvel found another publisher using the name Odyssey. This magazine eventually inspired the Marvel Comics imprint Marvel Epic Comics.