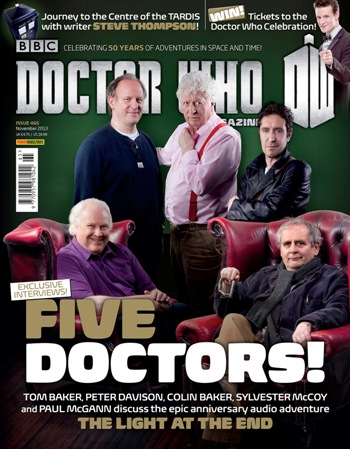 The cover of DWM 465, dated November 2013, features six of the actors who have played the Doctor on TV. (Matt Smith is in the upper right hand corner.)
"Adventures in space and time — every four weeks!"
— Masthead promo, since issue 450
Advertisement:

The longest running official Television Tie-In Magazine in the world, as declared by Guinness World Records,note An award the magazine received twice - initially in 2010, and again in 2016 as part of the celebrations for issue #500. Doctor Who Magazine started off as Doctor Who Weekly (it changed to a four-weekly schedule after 43 issues) back in 1979, and continued uninterrupted even throughout the Wilderness Years of 1989 to 2005.

Originally published under the UK branch of Marvel Comics, it is now published by Panini Comics, who absorbed Marvel UK in The '90s.

DWM is a lot more independent than most such mags, printing reviews that can be highly critical and happily criticising many of Doctor Who's poor past episodes. It has become very close to the production team and is very much a source for exclusives, especially episode titles.

It regularly publishes specials, including Making Of guides for every season of the new series.

It's also spawned a few spinoffs, including a short-lived poster magazine spotlighting the series' monsters; Doctor Who Classic Comics, which mainly reprinted pre-DWM Doctor Who comics; and Doctor Who Insider, for North American fans. The current sister title is Doctor Who Adventures, which originally launched in 2006, and was acquired by Panini in 2015; it's aimed at the show's kid fanbase, with a mix of in-character written activities, games, posters, short stories, episode recaps, and comics — a format very similar to that of the earliest years of DWM.

The magazine has a lot of regular features:

The front covers are somewhat notable in their own right.

open/close all folders
The comic strip contains examples of:
Other features in the magazine include examples of: