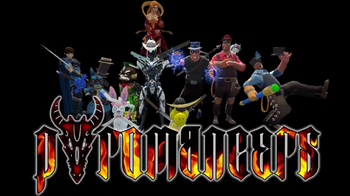 Ze Pyromancers is a YouTube team that primarily dabbles in Garry's Mod Machinima. Their primary videos are part of their Pyromancer Misadventures Series, in which the team's Author Avatars go about their days in various hijinks. From playing baseball, to escaping an underground cave they were trapped in, to battling the evil forces of the Necronomicon. Each one also has a weapon and power, as well as a model based around a specific character.

In addition, they have a smaller series called, Pyromancer Shenanigans which contains some members of the team doing live commentary while playing games together, usually as filler until the next animation comes out.

List of Games played in Shenanigans
Advertisement:
They can be found here

Has a Characters page.

The current members of Ze Pyromancers include: