Machinima / Tobias and the Half-Pariah 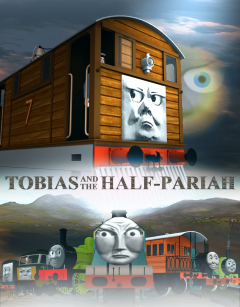 from YouTube. It's based on the works of Rev. W. Awdry, and uses elements from both The Railway Series and Thomas and Friends.

Tobias, more commonly called Toby, was a small little tram engine who worked on his tram line with his faithful coach Henrietta. But hard times came, and the tram line shut down. Toby thought it was the end, but when a stout gentleman came to the railway one day, Toby's life changed forever.

He was taken to Sodor, and began a new life. He soon began discovering he was stronger and faster than most of the other engines, much to the dismay of one express engine Gordon. He was so hailed, he was allowed to pull the express himself.

But Toby's power is not without cause — and effect. His powers were ill-begotten, and another engine faced the worse end of the equation. Now this engine is after Toby and his power, and Toby will have to come to grips with what he is, what it means for the others, and how his life will change on the North Western Railway.

So to simplify, it's basically a Darker and Edgier take on Toby's origin story covering how he arrived on Sodor.

A sequel, Tobias and the Arcane Merchant, is currently in the works and scheduled for release in August-December 2018.

The whole film can be watched here

Tobias and the Half-Pariah contains examples of: