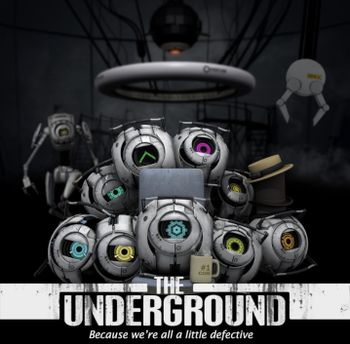 "Welcome to The Underground, where the rejected are respected and the best case has no place."
Advertisement:

is a Machinima set in Portal 2. In the undergrounds of Aperture Science Laboratories, where defective products are thrown, an Interview Sphere creates a show for defective personality cores. Hilarity Ensues.

While initially cancelled in 2013 after six episodes, in early 2021 the series abruptly returned with a new episode. Soon after, remastered versions of the previous episodes were uploaded, followed a few months later by another one.

The Underground contains examples of these tropes: