Machinima / The Stories of Sodor 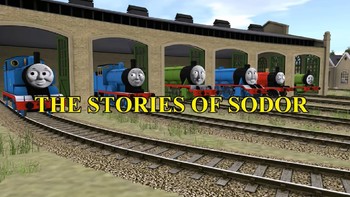 Don't believe the smiles and colours. There are things that are not suitable for kids.
Advertisement:

The Stories of Sodor is a 2017 YouTube series by Victor Tanzig based (somewhat loosely) on The Railway Series.

The series is set in an Alternate Universe in which the North Western Railway is not formed until the 1990s. Instead, Sodor is divided between the London and North Eastern Railway (LNER, also known as the Nor'Easters) and the London, Midland, and Scottish Railway (LMS, also known as the Midis). The series' first season takes place during 1935-38 in the midst of the Great Depression and the Spanish Civil War, the latter of which creates a large refugee crisis on the island. The second season takes place in 1938-39 in the leadup to World War II. A mini series titled "Stories of War" takes place between the second and third seasons, and covers World War II itself. The third season takes place during 1945-55 and deals with the aftermath of World War II and the resulting nationalization of Britain's railways along with other industries such as coal. Season 4 will take place between 1955 and the 1960s, and deal with the dieselization of British Railways and the coming of the mysterious SCP Foundation (no, really.)

Also by Tanzig is a series called Sodor Shorts. These shorts are not canon to the main series, and are more comedic in nature. Common themes include:

The Stories of Sodor provides examples of: