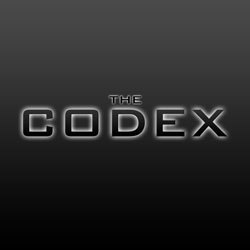 I think the war just got here
A Halo machinima series released during 2005, The Codex was created by Edgeworks Entertainment, headed by Alexander Winn and Ryan Luther. Consisting of twenty episodes, it focuses on the Covenant invasion of a human planet named Ariaos II in order to recover a Forerunner artifact called the Codex.
Advertisement:

The human resistance is lead by two teams of Spartan II supersoldiers, Red Team and Blue Team. Befitting their names, Red Team is lead by Jack Foster, a wild and optimistic soldier, and Blue Team is lead by Candice McKenzie, a more reserved and precise soldier. Overall command falls to the leader of the Spartans, the Chief. The Covenant forces are lead by the Praetor, supported by Anda Sofadee, and complicated by the presence of the Cleric and his Seraphim, who have their own agenda.

It is set as close to Halo canon as possible and focuses on the action and drama of its franchise, forgoing the humor that most Halo machinimas shoot for. The entire series was conceived and completed before any of its production crew had completed college and was produced only on personal computer equipment and X-Box consoles. Copyright laws meant that Edgeworks Entertainment could make no profits off the sale of the videos themselves, and instead kept the site active and funded through "sponsorships." It won six categories of the 2005 Rockets on Prisoner awards, and has a large international fan base. Chris Anderson, Editor-in-Chief of Wired magazine, even blogged

, and on iTunes in podcast form

. The Reclaimer, a sequel, was planned, but Edgeworks decided against making it due to Microsoft's Content Usage Terms. See also TerraGenesis, a later and more successful work of Winn and Edgeworks.

The Codex Series Contains Examples Of: