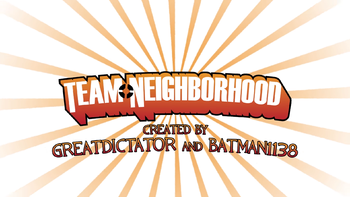 Have you ever wondered what the colorful cast of Team Fortress 2 do when they aren't blowing each other up over pits of gravel?
Team Neighborhood, an episodic Machinima created by Greatdictator and Batman1138, features the RED and BLU teams (and assorted characters from other games) living directly across each other in a suburban neighborhood.

Each episode revolves around them performing some relatively mundane activity (like hosting a barbecue or trying to watch a TV show), but since this is a World of Ham, these activities are taken to their logical extremes, and Hilarity Ensues. Meanwhile, a mysterious third party has taken an interest in the teams' off-work exploits.

The tropes featured in Team Neighborhood are: