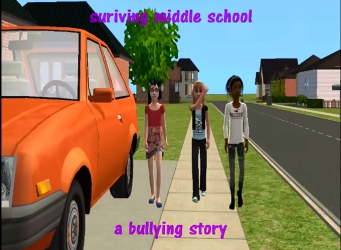 Pictured from left to right: Kyra, Lucy and Audrey.

Surviving Middle School: A Bullying Story is a machinima made by SimbcatProductions

. It consists of 19 episodes and is divided into two seasons. The first season centers around a 6th grader named Lucy Smith, who returns to her hometown only to find her former friends have become popular and no longer want anything to do with her. She immediately becomes a target of their bullying, and is soon joined by Kyra and Audrey, who are also bullied, as they try to make their way through school. The season season, which begins at episode 14, centers around Lucy's cousin, Brandy and her group of friends. The series ran from December 2012 to February 2014. On January 7, 2015, the creator announced a remake of the series was in the works, which began on September 2 of that year.