"Waluigi has been rejected from games for far too long..."
—Official description 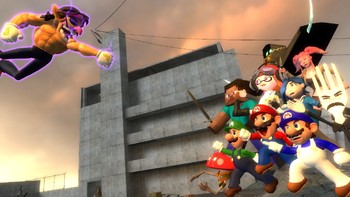 It's Waluigi's Time!
Art by ScoutMaster50

The one which started it all.

The Waluigi Arc refers to the first official SMG4 Story Arc. While not the first "blooper" story to be released in two or three-parts, the "Waluigi" arc spanned multiple videos on the SMG4 channel. It was the first arc of Season 8 in 2018, and was succeeded by The Rapper Bob Arc.

The story begins with Waluigi obtaining his secret power developed from being rejected from being a fully-playable character in Super Smash Bros.. With his new powers, he would soon wreak havoc on the Mushroom Kingdom, becoming a major villain in the process.

The Arc provides examples of: