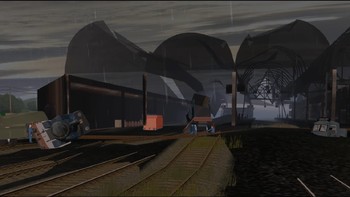 Don't say you weren't warned.
"Sodor is and never was always so happy. The writers of The Railway Series and the TV series only explore the optimistic and upbeat plots, very rarely did they steer otherwise. This film your about to watch explores these uncharted territories without any restraint. You may saddened, offended, angered or a mix of the three. Please, watch with discretion."
— Opening narration, first video

Sodor: Dark Times is a Thomas the Tank Engine fan video series that shows Thomas and Friends from a different perspective, exploring sadness, anger and Offense.

The series was made using Trainz and released in the summer of 2009. The Remake was released in 2019.