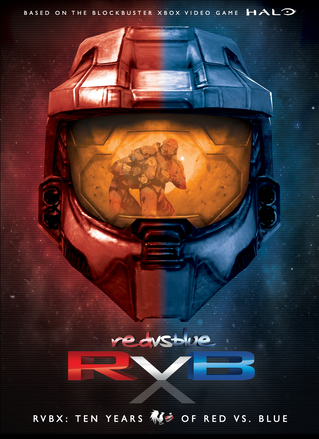 You ever wonder why we're here?
Washington: How do you ever get anything done if all you ever do is argue with each other?
Church: We don't! That's part of our charm! Quit fucking it up!
Advertisement:

Red vs. Blue is a Machinima/CGI-animated military Work Com set against the background of the Halo game series. Its creators, Rooster Teeth Productions, helped spark the whole Machinima explosion and went on to establish themselves as Fandom VIPs in the Halo community to the point of doing actual work for Bungie Studios, as well as making their videos available for purchase on Xbox Live.

Beginning as a simple comedy series, Red vs. Blue follows two military installations locked in eternal war with each other in a box canyon: the Reds and the Blues. In their next supply drop, both teams receive a new recruit each, who quickly get on their nerves. After a Snipe Hunt gone wrong ends with the Red Team's recruit capturing the Blue Team's flag, Blue Team hires a Freelancer Agent to give them an advantage... and things go downhill from there. As the running jokes and many characters begin to pile up, so starts a story that quickly develops a surprising amount of emotional depth while never forgetting its comedic roots.

The long-running story is divided into multiple story arcs, as detailed below.

The first seventeen seasons can be viewed at the Rooster Teeth website,

and on the official Rooster Teeth Animation YouTube channel.

The eighteenth, Zero, is currently airing on RT's website as well as on YouTube, with FIRST members having access to episodes a week in advance. Most seasons have home video releases (initially on DVD, later on Blu-Ray as well), and can be purchased on Steam, iTunes and Amazon Prime. The series made a televised debut on the El Rey Network in late 2015.

A series guidebook was published in 2015, titled Red vs. Blue: The Ultimate Fan Guide and compiling information relating to the first thirteen seasons.

Has an expansive character sheet here.

WARNING: As of Season 15, episodes will be released to Rooster Teeth FIRST members one week before the public. Beware of spoilers for episodes that haven't been publicly released.

Do you ever wonder why these tropes are here?

Red vs Blue: Public Service Announcements is a non-canonical Spin-Off made up of short Public Service Announcements featuring the cast of Red vs. Blue as they inform the viewer about various topics - I.e., the release of certain Halo games, the Winter Olympics, the importance of voting, and tax fraud. They usually air in the off-season periods, but have also been inter-cut throughout the current season's airing schedule in the past.

A brief miniseries, set in the Reach Blood Gulch during season 9. Grif is kidnapped and the Reds and Blues must team up to find him.

Another brief miniseries, also set in the Reach Blood Gulch during season 9. Sarge discovers a strange wall behind the Red Base.

A series pilot that was shown at PAX 2008 and later announced dead at the 2010 San Diego Comic Con, due to a combination of time constraints, money and the staff's inability to work on the timeframe of another company. The Pilot/Trailer can be found here

. The pilot later became a part of the first episode of Season 14, where it is revealed to be a simulation run by Epsilon between seasons 8 and 9.

A non-canonical miniseries starring Shatter Squad from Zero, the miniseries is described by the showrunners as a character showcase.

It's one of life's great mysteries, isn't it?