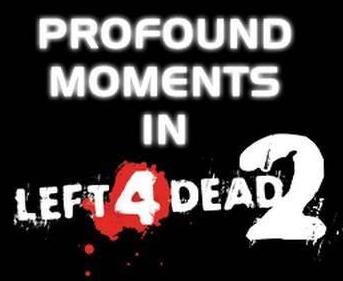 Profound Moments in Left 4 Dead 2 is a comedic Let's Play of Left 4 Dead 2. Four dudes with microphones allegedly attempt their first playthrough, while Hilarity Ensues as they manage to make fun of absolutely everything they come across in the game. Most of the laughs they create come from fooling about with objects, fake adverts and many other props that have no real impact on gameplay.

In each season, the gang does playthrough of a Left 4 Dead 2 campaign. Currently 5 seasons have been uploaded to YouTube. The original cast consists of Aovnick, Archaon, PuppySky, and Djy1991 (aka David), who is better known as the uploader of the graphic adaptations of some of squirrelking's and Peter Chimaera's works, like Half-Life: Full Life Consequences and Quarter-Life: Halfway To Destruction.

In season 2, Archaon was replaced with another player named TicTac, allegedly because Archaon's mom had a book club or something. In Season 3, two new members, Mastermind and Bro, replace PuppySky and TicTac. Season 4 sees the return of PuppySky, in place of Aovnick. Season 5 is a bit of a change, seeing the cast take on the first campaign of the original Left 4 Dead. Mastermind and Bro have been replaced by two entirely new players, PsychoDuck and Abby Ratso Lee.

You can watch the first season here,

, and the fourth season here

See also the Something Awful LPs of L4D1

by baldurk & co., which are similar in concept, but with a more static cast, slightly less screwing aroundnote rather, even more focused on teamkilling for little reason than commenting on background details as in Profound Moments, and showing off Versus mode and fan-made campaigns alongside the official ones.

Perhaps an unofficial continuation of the series is the Amazing Left 4 DeAdventure by Psychoduck, where he and some friends (including Abby and some of the Icton crew) play through the campaigns from where Profound Moments left off.