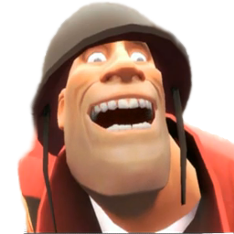 I will eat you!
Advertisement:

A famous Garry's Mod character created by the Youtube user RubberFruit. He is depicted as a RED Soldier who moves around in wild, erratic movements; either scuttling on all fours or slithering around like a snake, always with the sound of bones cracking or a shotgun cocking with each movement. When he approaches someone, he says "I am Painis Cupcake. I will eat you.", followed by an unnerving, open-mouthed grin. He then proceeds to violently kill and devour his victims. He quickly became a meme amongst the G-Mod video community, and has inspired several other "G-Mod Freaks".