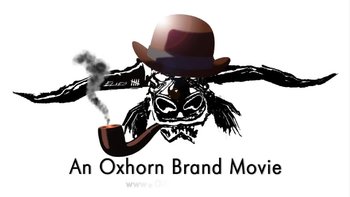 A Machinima made by a guy named Brandon M. Dennis and his friends, based on World of Warcraft. It follows the adventures of a Tauren, Oxhorn, and his friends.

The main parts are Inventing Swear Words, the Myth Arc concerning Oxhorn's guild's attempts to get around the World of Warcraft autocensor, and the Associate Professor Kills All X (X varies) trilogy, which is Exactly What It Says on the Tin. That, and the musical segments.

Unfortunately, due to being married with a child, Brandon M. Dennis retired from making Machinima on July 17, 2013.

Mr. Evil: "I want to assure the public that I am truly evil. I recycle everyday. I eat vegan meals and ride a hydrid kodo. I embrace political correctness and snuff out any opposing thought on campus. When my students speak of fiscal responsibility, I flog them with a tire iron. Ladies and gentlemen, I am your man."
Feedback

After getting pulled into the pie tin, Oxhorn, Staghorn and Mortuus wind up getting transported to Seattle.

Example of:
Place Worse Than Death

After getting pulled into the pie tin, Oxhorn, Staghorn and Mortuus wind up getting transported to Seattle.