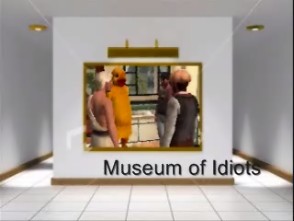 A machinima series, made by YouTube user manwithoutabody, done with The Movies, and yes, named for a They Might Be Giants song. It's visible as a YouTube playlist right here

Museum of Idiots is a sort of highly surreal sitcom, detailing the lives of four characters who all live in the same boarding house. They are The Student, ambiguously intended to be Arkenholz from Strindberg's Ghost Sonata; Chickensuit McChickensuit, attorney in a chicken suit; Mr. Blacktar, who is always weeping and screaming, and Aristotilian God, who is unaware of the presence of anyone but Himself, and spends all His time contemplating His own magnificence. Most episodes deal with the former two, because they are the only ones capable of speaking coherently. Other recurring characters include Chester, a swamp creature who sells moonshine, Terrence, The Student's schoolchum who, for no explained reason, is a Grey alien, and Adolf Hitler, whose presence is never really explained, but has a mancrush on The Student.