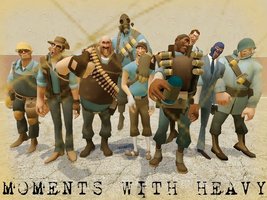 There's Slice of Life stories, and then there's this.

, who is remembered as an instrumental member of the community. The episodes star the BLU Heavy and center around activities that wouldn't seem out of the ordinary to us, such as going bowling or taking a driver's exam.

In Moments With Heavy? Said activities involve heaps of Surreal Humor and Rapid-Fire Comedy that manifest in ways such as people surviving deadly explosions (sometimes more than once), waiting for ''83 centuries'' for an Xbox 360 to be delivered, spitting up bowling balls and getting a strike, and to make this bizarre universe even more bizarre, Winnie-the-Pooh is a Smoker in disguise.

Seven episodes were made in total. Check them out here,

but be warned; there is enough insanity in this series, so it is not advised that viewers get high while watching. A posthumous episode, named Movie Night

Tropes that appear in this series: