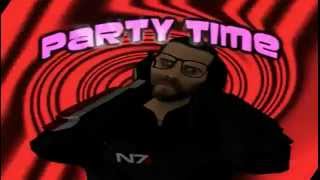 is a 30-minute Garry's Mod Short Film by the late kitty0706, who also made Moments With Heavy and Elliot Goes To School.

It stars Commander John Shepard as he and his Normandy crew hijack what appears to be the Enterprise, kill everyone inside, build onto it, and claim it as his own. Hilarity Ensues for an entire week.

Note that everything below makes sense in whatever context there is.

This video demonstrates the following tropes: