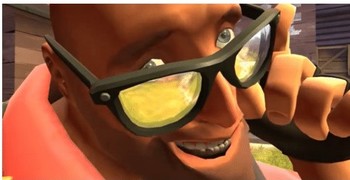 is a "murder mystery" parody by Antoine Delak

, the same guy who made the Gorgeous Freeman series. The story is obviously about an unlucky RED Heavy, who tragically perished at the hands of a conniving BLU Engineer, who later acts innocent as Heavy's comrades dig into the mystery of his demise.

Tropes are dead! TROPES ARE DEAD!? YES! THEY DIED!!!

Spy: Well, that was idiotic. Off to hang myself. Watch and le--(CRIT)
Heavy: I am alive! Is nice. Yes, this is stupid!