Machinima / Half-Life but the AI is Self-Aware 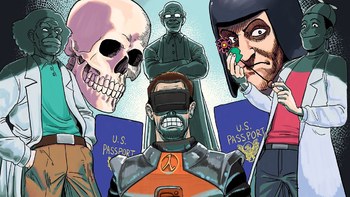 You should have brought your passport, Gordon.
"This isn't a video game anymore. This is an absurdist improv comedy about the last sane man trying to keep three lemmings and a god alive in a world gone mad."
—Top comment on Act 1: Part 1
Advertisement:

Have you ever wondered what would happen if Gordon Freeman weren't alone during the events of Half-Life? What if, instead, he were accompanied by a small band of AI-controlled survivors of the Resonance Cascade, and had to shepherd them through the dangers infesting Black Mesa? Now what if those survivors suddenly developed eccentric, frantic, and downright moronic personalities? It turns out, the end of the world becomes a lot sillier.

Half-Life VR but the AI is Self-Aware is a roleplay Machinima series by WayneRadioTV and other members of Radio TV Solutions. All episodes are almost pure improv, performed live through the medium of Garry's Mod with minimal scripting and preparation. Wayne takes the role of Gordon Freeman, with his friends playing the roles of his NPC compatriots. The core cast is comprised of Benry, a standoffish security guard obsessed with passports; Tommy, a childlike scientist with a surprising acumen for nuclear engineering; Bubby, a long-suffering particle physicist who brings his problems on himself; and the ever-babbling Dr. Coomer, whose AI appears to be just a bit broken. Only through teamwork will they be able to survive alien invaders and government assassins, if they can go five minutes without killing each other or themselves first!

The first Act was streamed onto Wayne's Twitch channel

on March 5th, 2020 with the fourth and final Act being streamed on April 9th. Edited versions of the streams were then uploaded to Wayne's YouTube channel

between March 13th and April 19th of 2020. More VR but the AI is Self-Aware series have been confirmed to be on the way, although if any of them will be a continuation of the Half-Life story is yet to be known.

Wayne and the crew would return to play their characters for their "AI-Crushes-All-Banks" Justice Drive charity stream on May 31st that year, where the Science Team makes good on their promise to rob a bank in PAYDAY 2 VR.

can i see your passport?
Feedback

It Had to Happen, Gordon

Tommy triggers a fire door and Benry holds it up so that everyone else can get through, before collapsing. Even though they have plenty of time to move him out of the way, everyone simply watches as he's crushed by the door.

Alternative Title(s): Half Life VR But The AI Is Self Aware

It Had to Happen, Gordon

Tommy triggers a fire door and Benry holds it up so that everyone else can get through, before collapsing. Even though they have plenty of time to move him out of the way, everyone simply watches as he's crushed by the door.