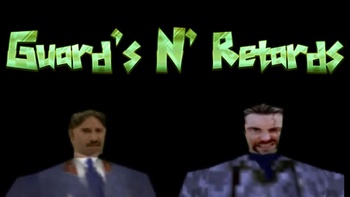 is a machinima series created by SMG4. Primarily filmed in GoldenEye (1997), the series focuses on Chris and SwagMaster696969696969, two guards working at the world's largest spaghetti factory. Unlike SMG4's bloopers, nearly every character uses text-to-speech for dialog.

"Mario and the Retarded Spaghetti Factory", uploaded on February 2, 2014, serves as a pilot to the series. Guards 'N Retards would become an official series on February 23, 2014. It would eventually merge with the main SMG4 series starting in 2019 with "Mario's Prison Escape".