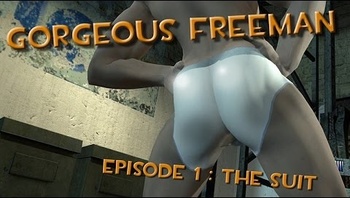 Get used to seeing this masterpiece, folks.
Gorgeous Freeman

. It follows a parody of Half-Life 2's storyline, where the most obvious difference is that Gordon Freeman (renamed "Gorgeous Freeman") spends about half of the series in nothing but his underwear.
Advertisement:

The series is acclaimed for its extremely bizarre and vulgar, yet professionally well-produced humor and style, akin to The Ren & Stimpy Show.

It was officially cancelled three episodes in, by late 2018.