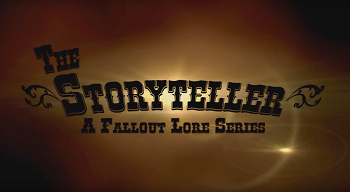 "But that is a story for another day..."
Advertisement:

is a Machinima series about the universe of the Fallout franchise, created by the Shoddycast channel on YouTube, who also do similar series for other storyline-heavy universes.

At first, it appeared to be simply be a in-universe recounting of certain parts of the Fallout games that players may have missed, forgotten about, or had never seen in the full context of the Fallout Universe. This was all well and good, and featured nicely done and heavily-researched in-engine recreations of scenes never before seen in the 3D Fallout games— or, in some cases, anywhere before.

And then, at the end of the first season, the camera pulled back and revealed that a man in power armor was telling these stories. Since then, this "Storyteller" has slowly been fleshed out, and the series has become just as much about his adventures and the people he runs into in the wasteland as it is about the stories he tells.

The series is very well regarded and has even received some Approval of God cameos by major Fallout figures. To date, Erik Todd Dellums, Wes Johnson, and Heather Marie Marsden have reprised their roles from Fallout 3note Dellums as Three Dog, Johnson as Scribe Biggsley and an Original Character, and Marsden as Sarah Lyons, and Tim Cain, Chris Avellone, and Josh E. Sawyer have appeared as Chris's Bounty Hunters from Fallout.

Not to be confused with the Fallout episode of LORE in a Minute.

"Of course, that's just the handful of stories I've happened to stumble across in my days. The Wasteland has many more mysteries buried in its sands, and strangers like me are all too happy to share them... But that is a story for another day."
Feedback

They might not be as reliable as a Laser Rifle, but there's a time and place for everything.

Example of:
Exactly What I Aimed At

They might not be as reliable as a Laser Rifle, but there's a time and place for everything.