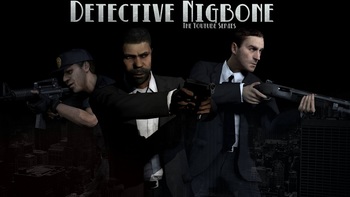 Don't make me kill yo' ass!

Detective Nigbone is a series of youtube videos made by Nigbone using Garry's Mod, before making the switch to source film maker on episode 4. The series chronicles the life of Detective Nigbone as he is out to "solve all da crimes." The titular character is rash, tactless, and can come off as down right idiotic, but somehow, he always manages to solve da crime he's appointed to.

The series consists of six episodes (not counting the Nigbone bits, and the Five Crimes at Freddy's video), with a seventh episode teased a few months ago.

The show has since been cancelled, originally thought to be in a indefinite hiatus, but has been confirmed to be cancelled after a post on Nigbone's official Facebook briefly stating he's retired.