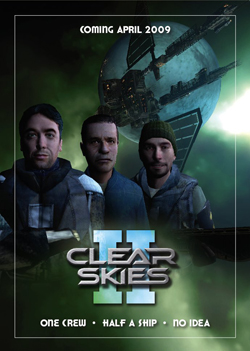 Not kidding about that 'half a ship' part.
"They even attached the top wingy-bit properly." —Charlie Fodder
Advertisement:

Clear Skies is an EVE Online machinima fanfilm that uses footage from EVE itself for its exterior space scenes, much like Red vs. Blue is filmed entirely in Halo. As the game had no interior areas at the time of filming, interior shots are done using the Half-Life 2 engine. While Half-Life 2's character models are reused, all the 'sets' are newly designed to great effect, and windows looking out into space are accomplished by blue-screening EVE footage onto them.

The plot follows John Rourke, Solomon Burke and Charlie Fodder. Together, they form the motley privateer crew of the titular Clear Skies, a Minmatar Tempest-class battleship out in the boonies of space. Currently, three "episodes" exist, but they take a bloody long time considering the amount of sheer effort the creator must endure to make one, so the series is filmed like an hour-long television show, complete with scene breaks where commercials would be.

Clear Skies is notable for the quality it presents. The visuals are filmed with a professional level of direction, the music was well-selected and well-timed with the scenes, the voice-acting is top notch despite being entirely amateur, and the writing is far better than many actual television shows.