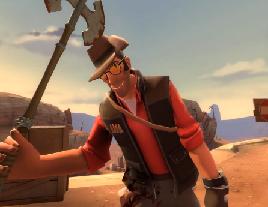 Let's see how much blood's in ya!
Advertisement:

Christian Brutal Sniper is a series of GMod machinima videos made by KelThuzadMadness. They follow the adventures of the eponymous RED Sniper as he joyously kills members of BLU and RED alike, in an almost nonchalant manner. Though, there's a backstory to this, and it's very, very dark.

Videos in the main series by KelThuzadMadness include: