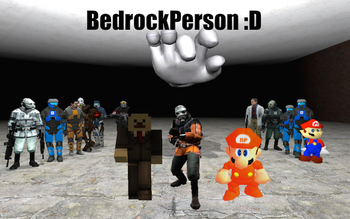 Alright full disclosure, yeah, I wrote a TV Tropes page about myself. I was a stupid 14-year old, I didn't really... realize how totally conceited this whole thing is. So, hey, thanks for the lookie. I apologize for what's ahead.BedrockPerson

is a rather little known YouTube user that started out in 2013. Since then, while having a small fanbase, has become popular in the SM64 Machinima Community, even gaining attention from SM64B greats such as SMG4 and MarioMario54321

More specifically, there are 3 main series on the channel, the sparsely-updated Minecraft, the ended mega-popular Super Mario 64 Bloopers series, and the incumbent G-Mod series, The Wonderful Misadventures of Jerry and Joe.

There is a second channel

for extras and behind-the-scenes looks.