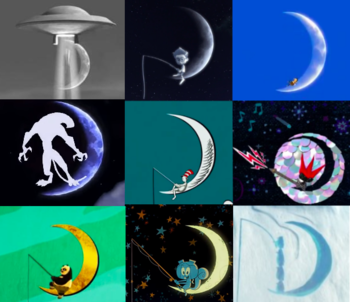 The phases of the moon.L-R, top to bottom Monsters vs. Aliens, Mr. Peabody & Sherman, Bee Movie, T'ai Fu: Wrath of the Tiger, The Cat in the Hat, Trolls: World Tour, Kung Fu Panda 3, The Adventures of Rocky & Bullwinkle, Penguins of Madagascar.
DreamWorks has its Iconic Logo, a moon with a boy fishing from it. The company's works often play with the skyline, put the boy through some sort of misery related to the story, or replace the boy with a character from the work.
Advertisement:

As DreamWorks Animation became a major animation studio that developed its own animated media, it redesigned the logo and experimented with it further, including more logo jokes. One popular way to open a DreamWorks Animation movie is to pan down from the scene with the boy in the moon, so even logos that are otherwise normal will have the sky altered to match the opening scene.

As their television library began to expand with the advent of streaming services, it has become tradition for all of DreamWorks television shows to have their own take on the logo animated in the show's style.