"We live, we learn; what we, in our ignorance, call Knowledge." 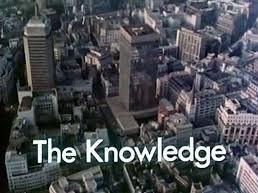 It's a big place, London.

The Knowledge is a 1979 made-for-TV comedy, written by Jack Rosenthal, about the extremely demanding test of the geography of London

, known as "the Knowledge", which must be passed by all those aspiring to drive the famous black London taxis. London is a big place: they have to bone up in their heads a grand total of approximately fifteen thousand, eight hundred and forty-two streets, and the few thousand buildings on those streets, by heart. No other taxi driver in no other city, in no other country in the world has to know a fraction of what they have to know.

The film follows the attempts of four working-class "Knowledge boys": the nervous Chris and his crotchety girlfriend Janet, the Nice Jewish Boy Ted, the cocky Gordon, and melancoly "Titantic", as they embark on their marathon quest to pass the Knowledge, which might take a year, or two, or seven, or ten, often to the exclusion of everything else in their lives. To do this, they learn routes (known as "runs") through London, while they ride on mopeds.

They regularly have to present themselves for tests, known as "appearances", in which they have to recite "runs" in a manner of Sesquipedalian Loquaciousness such as "The journey from Manor House station to Gibson Square is: left Highbury Grove, right St Paul's Road, comply Highbury Corner, leave by Upper Street, Islington town hall on left, right Theberton Street, Gibson Square." These appearances are conducted by the ultimate Deadpan Snarker, Mr Burgess (played by Nigel Hawthorne), known by the Knowledge boys as "The Vampire", who drills them not only in Knowledge, but their ability to deal with people, who are a very peculiar form of life: compared with people, the Knowledge is a piece of marzipan.

There was a theatrical adaptation of The Knowledge, directed by Maureen Lipman (widow of Jack Rosenthal), which had a brief run (no pun intended) at the Charing Cross Theatre: forward Whitehall, comply roundabout, forward Northumberland Avenue, left Villiers Street, set down on left.

The Knowledge contains examples of: