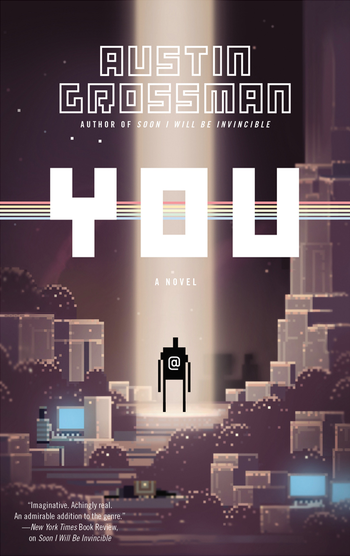 If you think this cover art looks familiar, check out Superbrothers: Sword & Sworcery EP.
You is a 2013 novel by Austin Grossman (Author of Soon I Will Be Invincible) about a fictionalized video game development company.
Advertisement:

When Russell Marsh was in high school he ended up friends with a group of nerds. They wrote a video game as a school project which evolved into Realms of Gold. When they graduated two of those friends started Black Arts Games, however Russell Marsh, who had always had a not very secret ambition to become "cool", abandoned his nerdy friends and hobbies and went to law school. Years later Black Arts has become moderately famous while Russell has dropped out of college and has struggled to find a career or vocation. Now, out of desperation to find some kind of meaning in his life, Russell is going back to his old friends and asking them for a job as a video game designer.

Russell quickly finds a serious bug in the core game engine, and his attempts to track it down involve both a recapitulation of the history of video games from the early 80s to the late 90s (mostly as re-imagined through fictional Black Arts games) and contemplation of the troubled relationships between the original group of friends.

Notable for being quite an accurate depiction of the day to day work done in a typical mid sized game development studio, albeit turned up to 11.