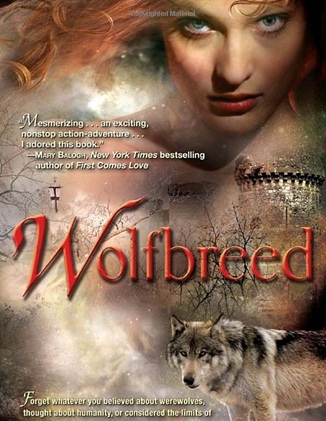 Wolfbreed is a novel by SA Swann about a girl named Lilly who makes a gruesome escape from her captors. During her escape, she receives head trauma and develops an innocent split personality. Shortly after her escape a boy named Udolf finds her and brings her home. As the novel progresses we find out that the girl is in fact connected with the boy's horrific past.

Wolfbreed was, as you may have guessed from its premise, inspired by Elfen Lied. However, the author actually gives credit to the original work. Despite it having a considerably happier ending, it's every bit as violent and gory as its counterpart.

The second book in the series, Wolf's Cross, is a little more original. Maria, a 16-year-old servant in a Polish fortress, witnesses the arrival of a party of Teutonic knights, warrior monks, who are battered and beaten. Seeking refuge after a horrible defeat, they surrender their weapons, which, surprisingly enough, are edged in silver. Maria is assigned to care for Josef, who is not expected to survive his wounds. One night when heading home from the fortress, she is attacked by a stable hand and rescued by revenge-seeking wolfbreed Darien, who comes out of the woods and displays super strength. When he gets her to remove the silver cross her father and stepmother have insisted she wear her entire life, she discovers that she is a wolfbreed.