Literature / What A Horrible Night To Have A Curse 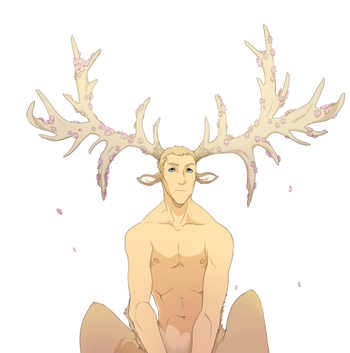 "He had, all his life, been so much a part of Florida by blood and by birthright, and now Florida had absorbed him, now he had become, terrifyingly, transcendently, the real Florida himself."
Original illustration for the story "Bloom" (NSFW)

.
Shapes, neither human nor animal, lurked in the trees, tombstones shifted seamlessly into forest, clawed hands and hooved feet pushing and erupting from the ground, rotting, skeletal, with a vibrating earthquake beneath it, a long muted bellow like wind rattling through branches.
—from "Forests of the Noonday Sun," depicting something that happens more often than you might think.

in the sense of being attracted to actual mythical monsters. Many of the monsters are taken directly from Mountain Folklore and elements of Appalachian or Southern imagery.

All of the stories are interconnected, and serve to form a bigger picture of the universe that The Dogs takes place in, although sometimes the connections are not readily apparent and are only given subtle hints.

Although a print version has been in the works since like 2014 or something, the stories have recently been restored to Veidt's SoFurry account.

The stories are, in reverse chronological order starting in an In-Universe date of 2013, are:

What A Horrible Night To Have A Curse contains examples of: