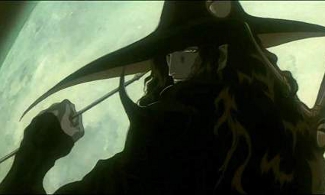 "Okay, I'm suffocating now!"
THIS STORY TAKES PLACE IN THE DISTANT FUTURE. WHEN MUTANTS AND DEMONS SLITHER THROUGH A WORLD OF DARKNESS.note No, not that one.
Advertisement:

A horror novel series by Japanese author Hideyuki Kikuchi, a horror novelist in the same vein as H. P. Lovecraft and Stephen King,note At least according to the blurbs on the back of the books themselves Vampire Hunter D is the story of a half human, half vampire vampire hunter, usually just called D, who is scorned by the world that he roams. With the help of a morbid and otherwise obnoxious (but very useful) parasite that lives in his left hand, D wanders to wherever he is needed in a post-apocalyptic world in the year 12,090 AD where monsters roam and humans live in fear.