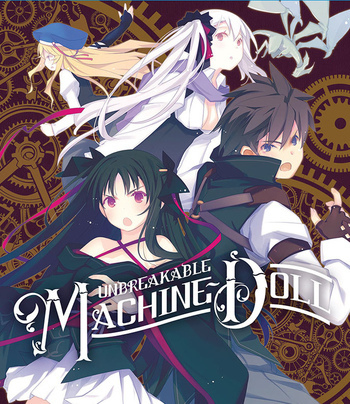 Early 20th century, mankind was able to establish advanced magic into a system; Machinart. The combination of magic and science which involves running a magic circuit through an automaton and having a puppeteer control it. However, in this era, the technique is being exploited for military use as major world powers are at a frenzied state to outdo each other. As a World War looms, Raishin Akabane, a puppeteer from Japan, together with Yaya, his automaton, arrived in Machine City Liverpool in United Kingdom and entered the Walpurgis Royal Academy of Machinart to join the Night Party, a series of battles wherein Machinart clash until there is only one left standing and become the Wiseman, mainly, to spy on the latest Machinart developed by major world powers for the Japanese Army, though in actuality, to exact revenge on his brother Tenzen Akabane whom he assumes of having killed their clan and he assumes of being Magnus.

Unbreakable Machine-Doll (Kikou Shoujo Wa Kizutsukanai) is a light novel series written by Reiji Kaitou and illustrated by Ruroo, which was published from 2009 to 2017 for a total of 17 volumes. It also has a manga adaptation illustrated by Hakaru Takagi which was serialized in Monthly Comic Alive from 2010 to 2017, and an anime adaptation which aired during the Fall 2013 season.