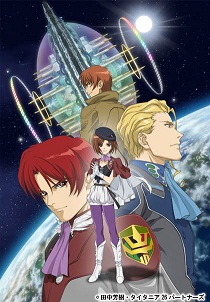 Before the fall.
Advertisement:

Tytania is a Japanese series of novels written by author Yoshiki Tanaka with illustrations by Katsumi Michihara. Formerly published by Tokuma Shoten, now currently under publication by Square Enix. With the first edition of the first volume published in 1988, the series was completed with the fifth novel published in 2015.

The series has been adapted to a shōnen manga also written by Yoshiki Tanaka and illustrated by Gantetsu. Published by Kodansha in Monthly Shōnen Sirius magazine, it was first put to print on March 26th, 2008 and and ended on October 26th, 2011, with nine volumes.

An anime was also adapted from the work written by Ken'ichi Kanamaki and directed by Noboru Ishiguro for Artland studio and premiering in the NHK-BS2 network. The anime originally ran from October 9th, 2008 to March 26th, 2009, with a total of 26 episodes. Tytania

The story of all incarnations of the work are set in a future where humans have spread their influence to many planets. The Empire of Valdana is under the control of the wealthy and powerful Tytania clan, having forged its influence through intimidation and economic might. In the year 446, the Tytania clan dispatches a large fleet to make an example of the planetary city-state Euriya; surprisingly Euriya decides to resist, and wins. This sets in motion a series of rebellions poised to topple the influence of the Tytania-controlled Empire of Valdana.