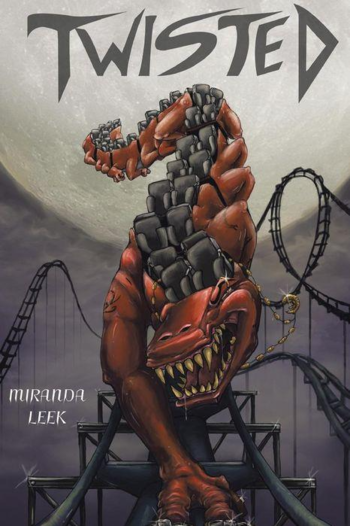 "But yet my name isn't really Rodney and I'm not really human. My name is Railrunner, a roller coaster. And I've been a coaster all along."
Advertisement:

Twisted (first published as Twisted!) is a work of fiction published in 2010 by Miranda Leek.

When Rodney applies for a job as a roller coaster mechanic, he never suspects the world of craziness he's about to enter. When the weird old guy who hired him prompts him to touch the rails, he experiences a massive shock and blacks out—and that night, turns into a living roller coaster!

The were-roller coaster that calls itself Railrunner turns out not to be just a random monster, but the lost Chosen One of the Amusement Park Between, another world populated by living carnival rides and currently ruled by an evil coaster named Ironwheel and his followers, the Fallen. With his mentor Thunderbark, the Park Between's former greatest warrior, and his companions Merrylegs the carousel horse and Static the bumper car, Railrunner fights his own bloodthirsty thrill ride instincts and his depression at being forever apart from his human girlfriend, Clare, as he attempts to rise to fulfill his destiny.