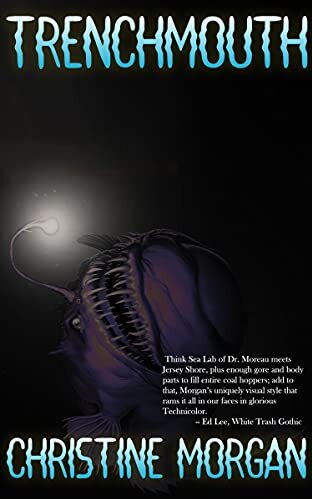 Fathom Five … a state-of-the-art oceanic research facility, suspended far below the surface. There, in the dark and the deep, a team of top-notch scientists study the ecosystems and denizens of an aquatic environment as alien as another planet.
Advertisement:

There, they also conduct illicit experiments upon hapless human subjects, with the goal of giving our species a chance to adapt to a changing world. Or, at the very least, to create mutant freaky fish-people, because, why not?

Oh, the arrogance and hubris of genius! Oh, the freaky things that already dwell in the strange, hostile depths! In the cold, crushing, silent pressure of a blackness lit only by eerie bioluminescence. Things that don’t take kindly to intruders Things that are ancient, and enormous, and hungry.

Trench Mouth is a novel by Christine Morgan.

This novel contains examples of the following Tropes: