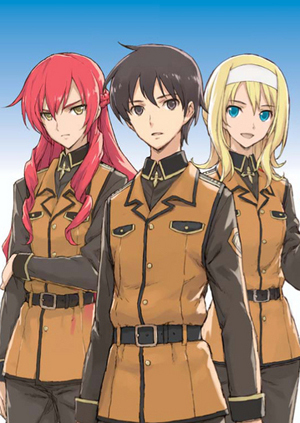 Left to right: Ilya Kleischmidt, Kiyoaki Sakagami, and Mio Seira.
"Even if we become enemies in war, we will not hate each other. Friendship is forever."
Advertisement:

As a young teen, Kiyoaki Sakagami witnessed the Sky Clan's (Uranus) brutal attack on his hometown. His family was killed in a deliberate air raid and his farm burned to the ground. Comforted by his close friend Mio Seira, he vows to crush the Sky Clan and bring an end to its wars of aggression. Three years later as air force cadets, Kiyoaki and Mio are selected to finish their studies at the Eahanto military academy in the allied Saint Vault Empire. They meet five students from the academy with whom their futures would be intertwined in a region of incessant wars...

Toaru Hikūshi e no Seiyaku (The Oath of a Certain Pilot) is a light novel series written by Koroku Inumura and is the final work set in his Hikūshi universe. It was published in nine volumes from 2012 to 2015 in Japanese. Seiyaku is set a few years after The Pilot's Love Song, and draws a few characters and plot lines from it and The Princess and the Pilot.

Like the other Hikūshi books, Seiyaku is an adventure story of air combat, military narrative, and romance. With seven main characters, the novels shift across a wide variety of scenes and locations, from the pilots to the spies and staff planners.