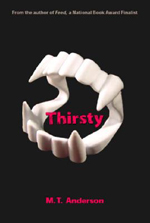 A novel written in The '90s by Matthew Tobin Anderson about a teenager named Christopher who's turning into a vampire and is trying to find a cure. It takes place in an Alternate Universe in a seemingly modern version of Massachusetts where magic and the forces of darkness are real.