Literature / The Woman in Black 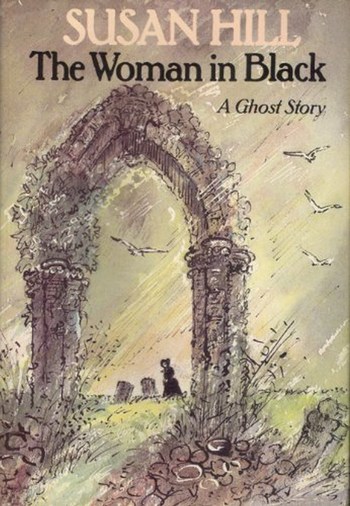 "They have asked for my story. I have told it. Enough."
Advertisement:

The Woman in Black is a 1983 English horror novel by Susan Hill.

The story centers on Arthur Kipps, a young London solicitor who is sent by his employer to the small market town of Crythin Gifford on the northeastern coast of England to settle the estate of the recently-departed Mrs Alice Drablow. The deceased was an elderly and reclusive widow who lived alone in Eel Marsh House, situated on a desolate island that is inaccessible for most of the day as the rising tide floods the causeway connecting it to the mainland.

Oh, and as Kipps soon learns, the place is haunted by the ghost of one Jennet Humfrye, Mrs Drablow's sister and the mother of her adopted son (both of whom had perished in a horrible accident on the marshes years earlier). Whenever her apparition is seen, a child dies.

There have been several adaptations, including a (still-running) 1989 stage adaptation, a 1989 ITV television version, two different Radio Drama versions by The BBC, and a 2012 feature film from Hammer Films.

The stage play has a different slant; in order to keep the budget low and to be able to do it as a two-hander play, it is instead portrayed as an elderly Kipps employing an actor to help him get the story across to his family.

The play has been running for more than 20 years at the Fortune Theatre, making it the longest-running thriller in London's West End (at, co-incidentally, the West End's smallest theatre), as well as the second longest-running play in all of the West End, after The Mousetrap. This play is a favourite of school drama trips, making sure the audience usually has a group of easily startled kids who will scream in all the right places...

Tropes common to all the versions:

Alternative Title(s): The Woman In Black