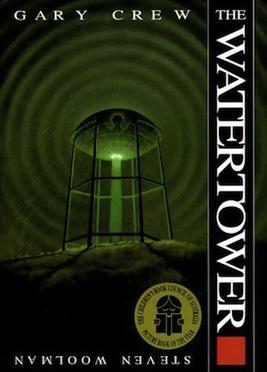 "Nobody in Preston could remember when the water tower was built, or who had built it, but there it stood on Shooter's Hill - its iron legs rusted, its egg-shaped tank warped and leaking - casting a long, dark shadow across the valley, across Preston itself.
—Opening text
Advertisement:

The Watertower is an Australian picture book written by popular children's author Gary Crew and illustrated by Steven Woolman. It was first Published in 1994.

The story follows two teenage boys - Spike and Bubba - who live out in a country town called Preston. They live nowhere near the beach and there's no pools around, so to cool off they decide to go for a dip in the enigmatic water tower. Bubba loses his shorts and is too embarrassed to go home, so Spike runs home to get him another pair. While Spike is gone, Bubba begins to suspect that there might be more to the water tower...

In 2004, a sequel was published called Beneath the Surface, casting a clearer light on what the water tower is really for, while still keeping some of its mystery.

"Deep in the tank, the water eddied and swirled"