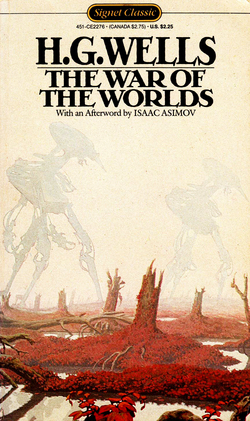 This isn't a war. It never was a war, any more than there's war between man and ants.
"No one would have believed in the last years of the nineteenth century that this world was being watched keenly and closely by intelligences greater than man's... Yet across the gulf of space, minds that are to our minds as ours are to those of the beasts that perish, intellects vast and cool and unsympathetic, regarded this earth with envious eyes, and slowly and surely drew their plans against us."
Advertisement:

So begins The War of the Worlds by H. G. Wells, the first Alien Invasion story, and perhaps the best known, in which late-Victorian England, then homeland of the world's greatest empire, is conquered with casual ease by Martians. In the end, only chance saves humanity from slavery or annihilation. The novel is arguably the ancestor of nearly every single book, TV show, movie and video game that features aliens.

The story begins with the unnamed narrator, a lightly disguised version of Wells, visiting an observatory, where he is shown explosions on the surface of Mars. Shortly afterwards, an apparent meteor lands close to the narrator's house in Surrey. When he goes to look, he sees the first of the Martians emerging from its spacecraft. The invaders swiftly set up strange machinery, incinerating all humans who approach.

The narrator takes his wife to presumed safety then returns just in time to witness gigantic tripods, Martian war machines armed with Heat Rays and poisonous Black Smoke, smashing their way through the massed ranks of the British Army. Three tripods are brought down in a succession of battles before the army and navy are routed, with more Martians landing, reinforcing the invaders.

A few are making grandiose plans for resistance, but it is clear they have no prospect of success: Great Britain, one of the most technologically advanced and powerful countries on Earth, has been utterly defeated. The narrator becomes trapped in the ruins near another Martian landing-site, where he gets a first-hand view of the aliens drinking human blood. It seems they intend to treat humanity as nothing more than food.

At this point, when the full consequences of defeat have become apparent, the Martians suddenly stop appearing. After returning to London, the narrator finds that all the Martians have mysteriously dropped dead, their remains being picked apart by birds. It was only later that they figure out that the aliens died from nothing more than common illness, as they had virtually no immunity to Earth's microbiological lifeforms.

Interestingly, the novel was originally considered part of a different genre - the "Invasion Story", of which there was a spate in the late 19th and early 20th centuries, depicting fictional invasions or invasion plans of the author's home country, usually by German or Crypto-German forces. Only later did the "alien" part of "alien invasion" come to be considered more defining than the "invasion" part.

The novel is generally regarded as an allegory of colonialism, depicting Great Britain receiving the same kind of treatment as it had been delivering to the natives of its empire (although figuratively speaking, Englishmen did not usually drink human blood).

For other media based on the novel see the Franchise page.