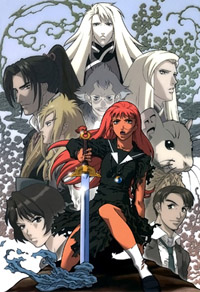 The Twelve Kingdoms is a series of fantasy novels written by Fuyumi Ono and illustrated by Akihiro Yamada, which began in 1992 and are still ongoing. The series was adapted into an anime by Studio Pierrot that aired on NHK from 2002 to 2003.

The anime is broken into Story Arcs, based on the novels and short stories. The first thirteen episodes deal with Youko's arrival in the kingdoms from the first novel, with episode 11 featuring Enki's backstory from the third novel. Episode 14 is largely recap, arguably useful in this case. Episodes 15-20 are a compression of 1½ other novels – Taiki's coming to the kingdoms, plus a truncated version of Demon Child (Taiki as an amnesiac in Japan). Then comes a short story episode and sixteen episodes for the second Youko novel, followed by another short story episode. Episodes 40-44 squeeze in the rest of the En novel followed by yet another recap... of those four episodes. The anime stopped there; another more Youko & Taiki-centric novel, a Kyou novel, two novels of short stories and a 2019 novel focused on Taiki remain unadapted.

The Twelve Kingdoms provides examples of: