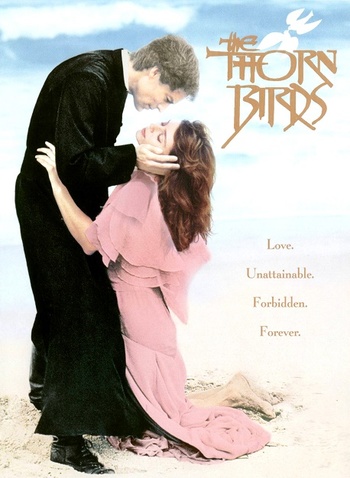 Ralph: There's a story... a legend, about a bird that sings just once in its life. From the moment it leaves its nest, it searches for a thorn tree... and never rests until it's found one. And then it sings... more sweetly than any other creature on the face of the earth. And singing, it impales itself on the longest, sharpest thorn. But, as it dies, it rises above its own agony, to outsing the lark and the nightingale. The thorn bird pays its life for just one song, but the whole world stills to listen, and God in his heaven smiles.
Meggie: What does it mean, Father?"
Ralph: That the best... is bought only at the cost of great pain.
Advertisement:

Not just a successful book in its own right (published in 1977) but also adapted in 1983 into the second highest-rated American mini-series ever, Colleen McCullough's The Thorn Birds branches over 50 years of the 20th century and focuses on the Cleary family, their home — a fictional sheep station called Drogheda — and the forbidden love between the daughter of the family, Meggie, and Ralph de Bricassart, an ambitious Catholic priest.

Has been described as the Australian Gone with the Wind, and with good reason. Not to be confused with the Korean drama of the same name.

Just starting on a character page.