Literature / The Third: The Girl with the Blue Eye 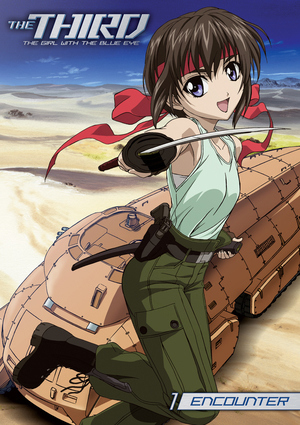 The Third is a series of Light Novels written by Ryo Hoshino and illustrated by Nao Goto, which began publication in Fujimi Shobo's Dragon Magazine in 1999 and is still ongoing.

Earth, After the End, AD. After one last Great War, the world's been turned into an endless desert, with scant handfuls of humanity eking out an existence amid the ruins of civilization. The world is ruled by an enigmatic race of mutants known as The Third. They appear elf-like, with fine features and slightly pointed ears, but their most distinguishing feature is a third Astral Eye in the middle of their foreheads. If red, this third eye allows them to interface directly with computers or other technology of the old world.

Fearing the world could be thrown into even more dire straits should any of the Applied Phlebotinum from the Great War get loose, The Third place strict control on what technology the rest of the world can have. Violating the Technos Taboo can result in anything from being dragged off and interrogated, all the way up to execution by the autonomous enforcer known as the Blue Breaker. Even so, there are still people working on and trading in forbidden tech, as breaking the rules and making scientific advances are two of the things humans just do.

It's into this world that Honoka is born. Naturally skilled with the sword, this Dune Runner (read: jack of all trades) will do just about anything during a job aside from killing people. She's joined by her snarky AI partner, Bogie, who pilots the sand tank Honoka runs around the desert in.

The two of them were just going about their lives, doing odd jobs for money and supplies, when one day they encountered an odd young man alone in the middle of the desert. His name is Iks, and meeting him was just the start of an adventure where Honoka's past and present would eventually collide.

The light novels received an anime adaptation in 2006, titled The Third: The Girl with the Blue Eye. It also has a manga adaptation that ran in Monthly Dragon Age from 2005 to 2006.

Alternative Title(s): The Third The Girl With The Blue Eye