Literature / The Tale of Genji
aka: Tale Of Genji 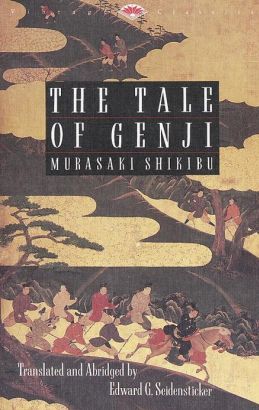 "When all life is dew and at any touch may go, one drop then the next, how I pray that you and I may leave nearly together!"

"In this fleeting world where no dewdrop can linger in the autumn wind, why imagine us to be unlike the bending grasses?"
— Chapter 40, The Law
Advertisement:

The Tale of Genji (源氏物語; Genji Monogatari) is, by most modern definitions, the first written novel and the first modern novel. It is also the world's first long-running novel in the Harem Genre. Its authorship is attributed to Murasaki Shikibu, a noblewoman and lady-in-waiting of the Heian court; probably completed in the early 11th century, all tropes it provides are at least Older Than Print. While considered a Japanese and indeed worldwide classic, its influence on both Western and Eastern culture and literature are still not clearly defined and hotly debated.

Hikaru Genji (literally "Shining One of the Minamoto Clan") is the illegitimate son of Emperor Kiritsubo of Japan, and considered too handsome for his own good. After Genji's mother dies, his father reluctantly removes him from the line of succession and demotes him to commoner status. Genji takes up a job as an imperial officer, and the story follows his sexual, personal and political exploits through the lens of Heian aristocratic society.

The novel has two formal sections: Genji's birth, rise, and fall are documented in chapters 1-41; while chapters 45-54 follow Kaoru, his son in-name-only, after a brief transitional section. The plot moves with the reckless speed of a ceremonial oxcart (i.e. about two miles an hour) but the exotic customs of the ancient and unfamiliar Heian world hold the reader's attention — when they aren't wincing in disbelief at Genji's hijinks. In fact, since the book was written at a time when women weren't supposed to learn Chinese, and within a court system where using names was considered rude, many copies of the book (including Japanese printings) are highly annotated, to keep track of the 400 or so characters who are named only by their ever-changing ranks and familial positions.

Note that, despite sharing a name with the author, Murasaki is not an Author Avatar. During the Heian era, court ladies were Only Known by Their Nickname. The author's diary indicates that she was known first as Shikibu and later as Murasaki, after her own heroine. Her real name is unknown.

Not to be confused with Genji, which is (loosely) based on The Tale of the Heike.

The Tale of Genji provides examples of: