Literature / The Tale of Despereaux 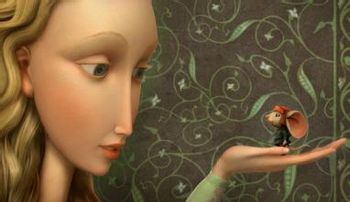 A Newberry Award winning fantasy book for children written by Kate DiCamillo. The book itself is split into four separate stories: "A Mouse Is Born," "Chiaroscuro," "Gor! The Tale of Miggery Sow," and "Recalled to the Light." The first three introduce the three threads of the plot and then they are all brought together in the final story.

The books were adapted to a CG animated film in 2008 by Framestore, which Disneyfied many of the darker elements while still keeping much of the original fairy tale feel of the book.

Tropes for both the book and the film:

Tropes found only in the film:

Alternative Title(s): The Tale Of Despereaux